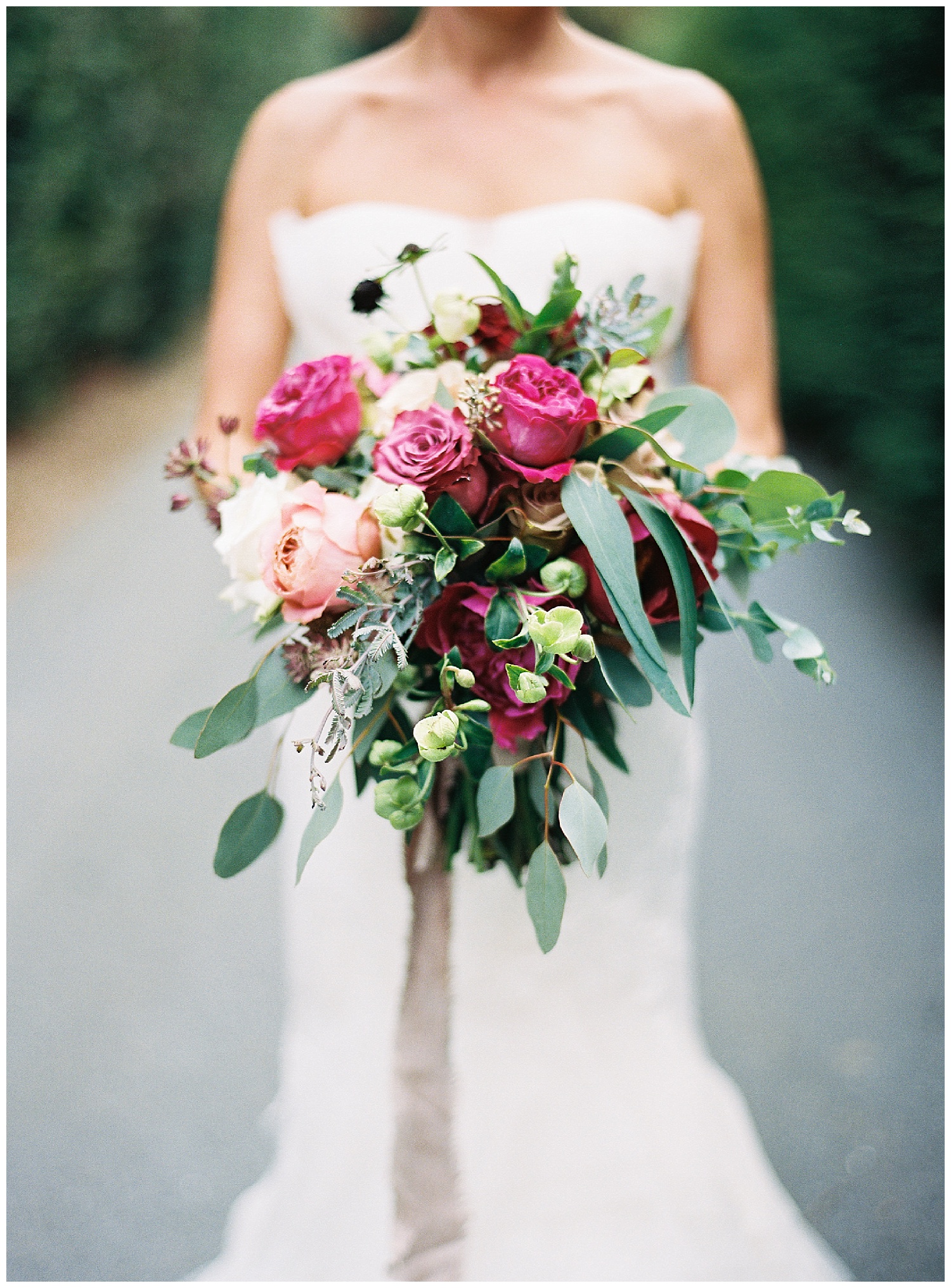 Posted at 13:06h in Uncategorized by Gulfstream

Ladies and gentlemen (if you feel so inclined), grab your cup of coffee, a comfy seat on the couch, and open up your Pinterest board “dream wedding” saves—no shame in being bashful, we all have a secret stash of wedding wants somewhere. Well, this wedding, this Beautiful with a capital “b” wedding between international couple Rachael and John (they currently reside in Portugal), at The Farm at Old Edwards is one you won’t want to miss. In fact, this was the first wedding we accepted for the inaugural edition because it immediately gave us those “need it, want it, gotta have it” feels and we knew it had to be shared with as many folks as possible. From the exquisite boutonnières designed by our gals at Floressence Flowers, to the sky-high champagne tower, to the palpable love shared between this pair of lovebirds, this Big Day is one we will soon never forget. Now, let’s hear more from the bride-y as her words are way more entertaining than ours. Take it away, Rachael . . .

Asheville Wedding Guide: How did you and John first meet?

Rachael: We met in Chicago in 2008. I had just moved there from Charleston, South Caroline. My sister was newly dating my soon to be brother-in- law and John was one of his best friends from college. We became friends but didn’t start dating until 2013. He had a girlfriend and I was starting a new career as a chef.

AWG: We see. So I guess the sparks didn’t fly until a later date.

Rachael: So, I always had a feeling that I was going to end up with John. He was a fun and great guy and we had a lot in common. The timing was always off though. Finally, in April of 2013 we were both at a point in our lives where we were both available and nothing was standing in our way. My brother-in-law, Matthew, went out with John to a concert one night and at the instruction of my sister told John to give me a call. It didn’t even take him 24 hrs. That night when I got off work I met him for a drink and so it began. I was working long hours in a kitchen and he had a job with normal working hours so it was a challenge at first. Our schedules were complete opposites. I knew if I ever met someone outside of the food and beverage industry and wanted it to work I’d have to make some tough choices. He would really have to be special because I’d probably have to quit my job and I loved my job. Welp, two months into our relationship he told me he was taking a job in Lisbon, Portugal, and he wanted me to come with. Apparently he was special enough because within six months I had quit my job and was packing my bags for Portugal. The move especially so soon into our relationship was tough. We had never even visited Lisbon let alone lived together. It forced us to really get to know each other and lean on each other. I think it was really great for us. Clearly, as John proposed to me on the evening of October 21, 2016.

AWG: Wow! That move across the pond was bold but a proposal certainly makes it worthwhile. Let’s hear about that fall night.

Rachael: It was a Friday night and John had taken me out to a nice dinner. Nothing seemed out of the ordinary, I didn’t expect a thing. After dinner, we decided to grab a bottle of wine from the restaurant and go home to enjoy it on our terrace. Once we were home we were just chatting and enjoying the nice night. I went inside for a moment and when I returned Elton John’s “Tiny Dancer” was playing and John was down on one knee. I couldn’t even tell you what he said. I was so blown away and excited that I just started crying and we hugged for quite a while. I finally had to say, “Well, put it on me!”

AWG: Well, that was sweet. Now tell us something silly—we heard through the grapevine you both stage dove at your wedding?

Rachael: Yes, that happened and I’m not sure how. We were on the stage dancing with the band and it was towards the end of the night, maybe even the last song. The crowd was amped up and taunting John. I finally let him go and boy, did he ever. Apparently I was next and like they say, if you can’t beat them,  join them. I’m happy to report they caught me and my Vera Wang gown survived. Too funny! Everyone was dying laughing, including our parents.

AWG: You guys are total rockstars! Last question—what did you envision for your autumn nuptials?

Rachael: John and I are both pretty laid back people so we wanted our wedding to reflect that. We wanted it to be formal but still have a relaxed and fun vibe. We had a small wedding party, only two people stood up on either side, so we let them choose their attire and didn’t want them to exactly match. This helped keep things light and let people interject some personal style. Our color palette was set in jewel tones and matched the season perfectly. It was actually my florist that helped me with this, Eatherley Schultz, at Floressence Flowers.  We chose navy, garnet, emerald green, magenta, some lighter pinks and gold. It all came together beautifully and I was blown away.

Scroll down past these stunning captures by Natalie Watson Photography to see who else played a part in the posh mountainside wedding. 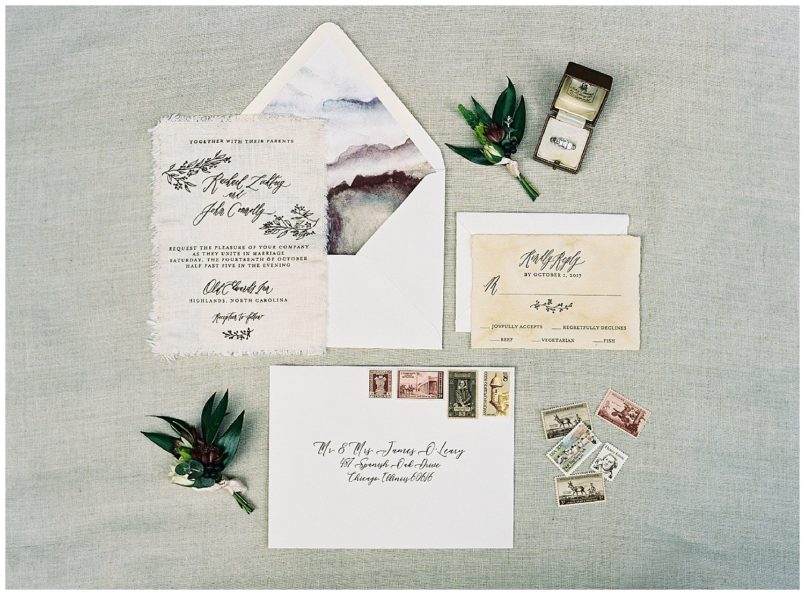 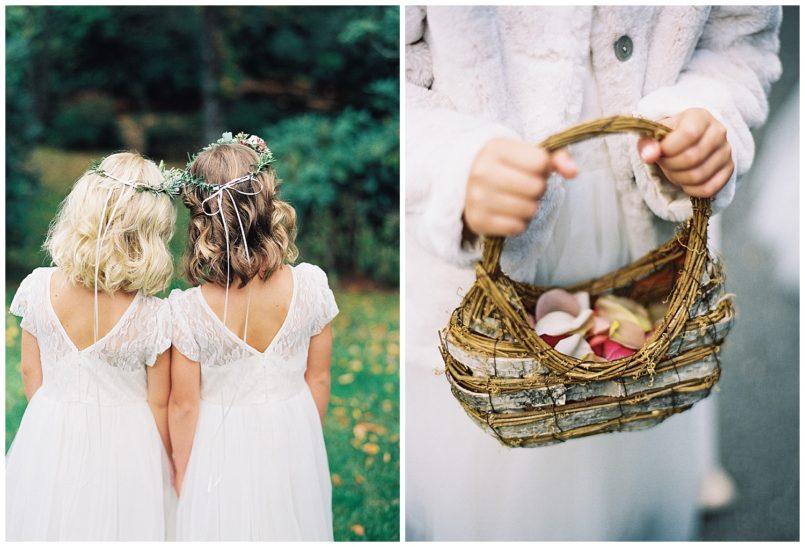 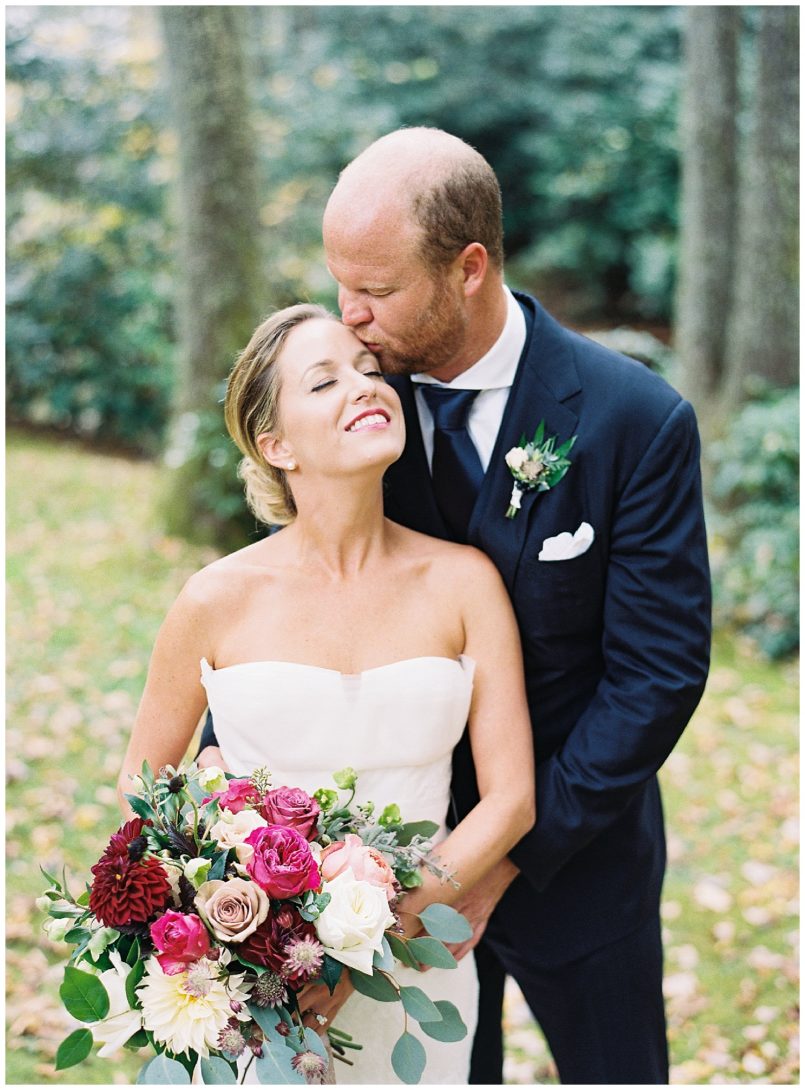 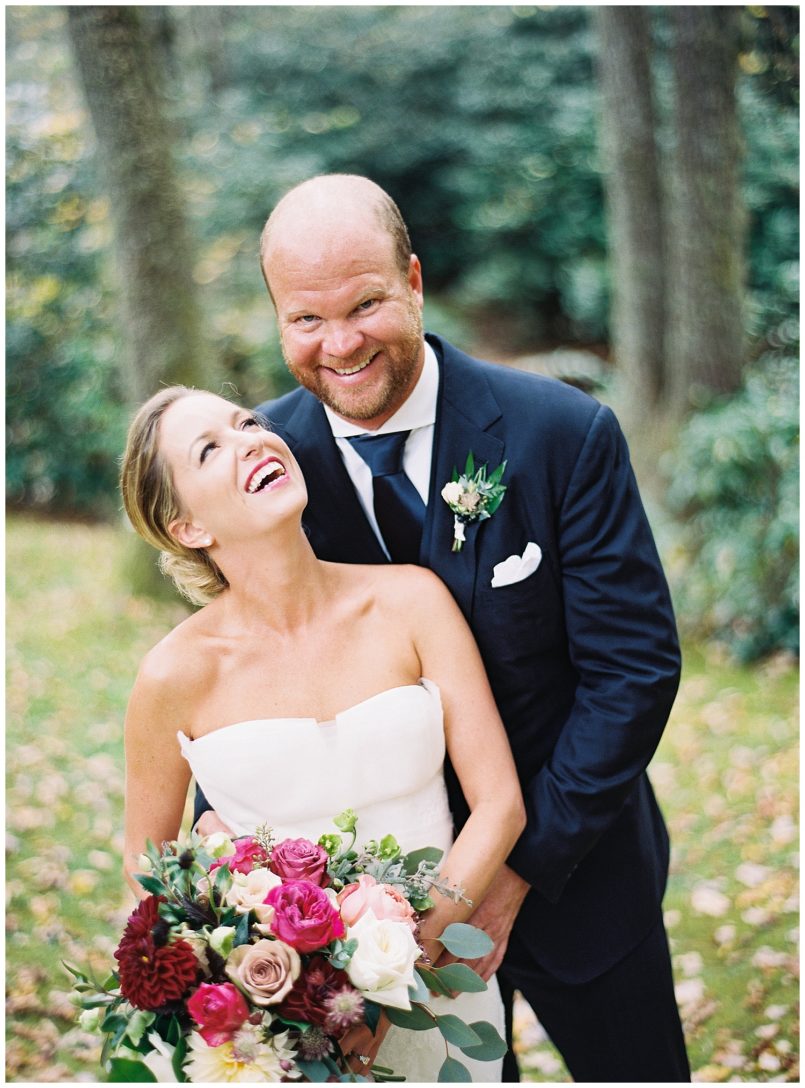 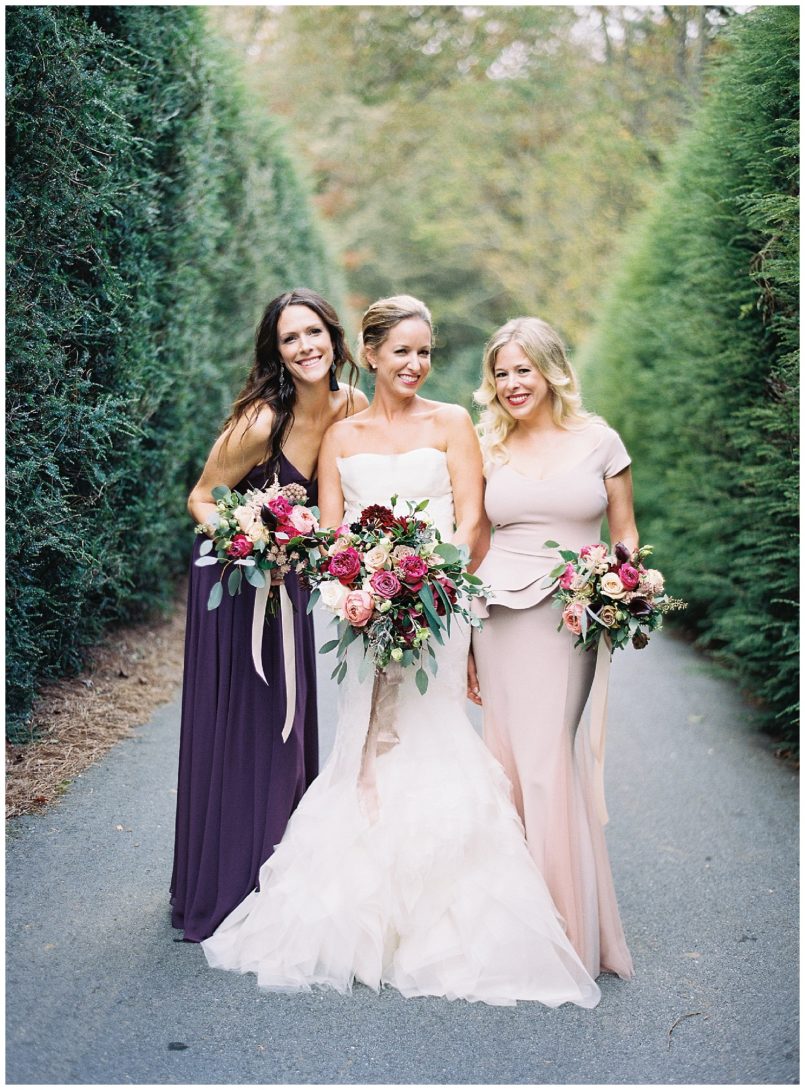 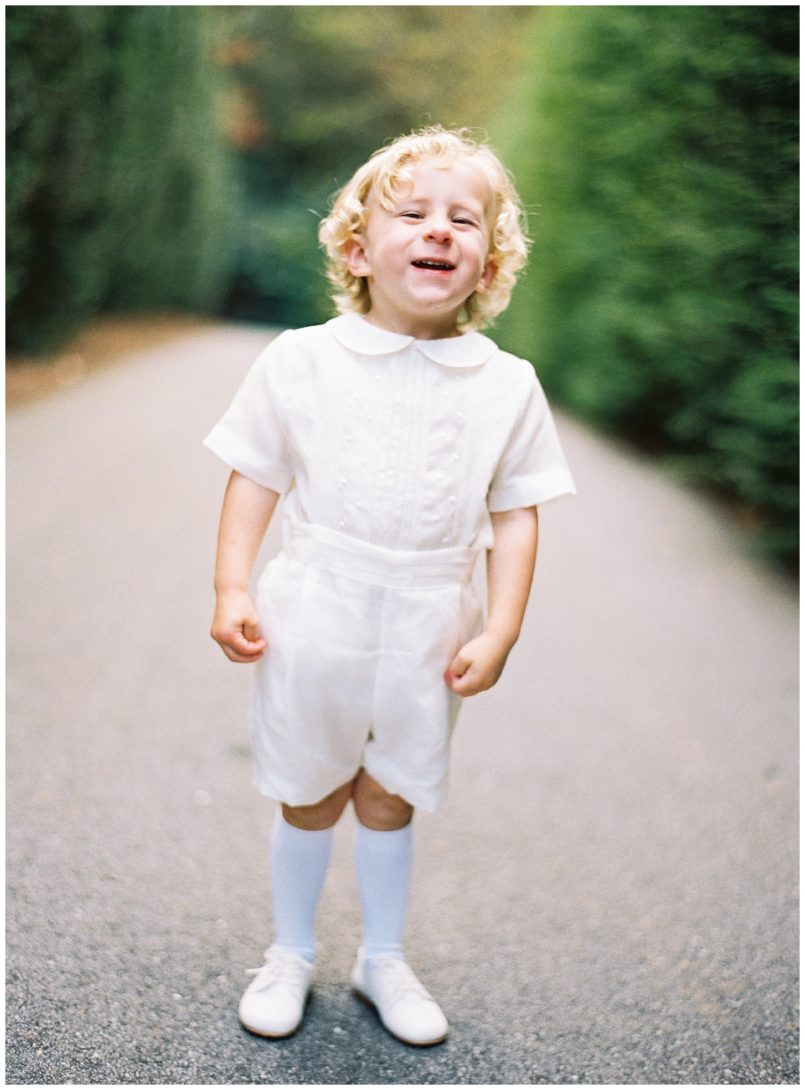 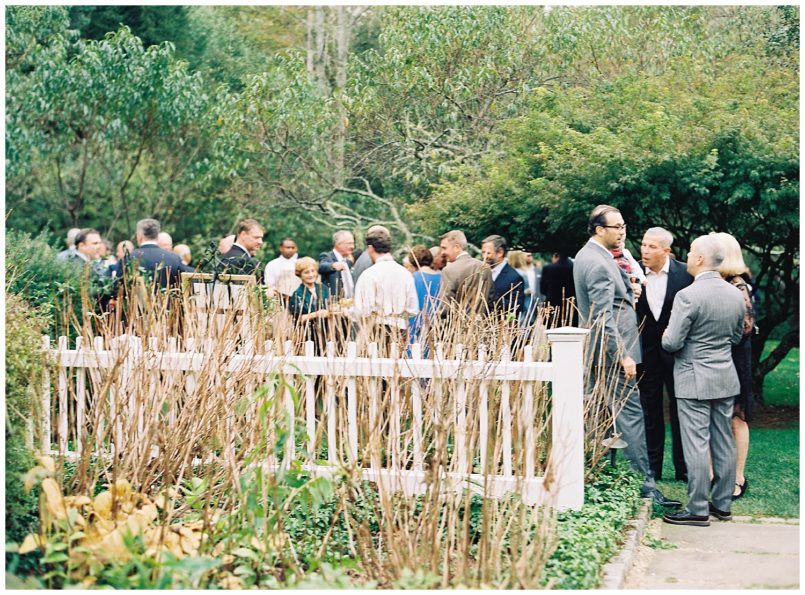 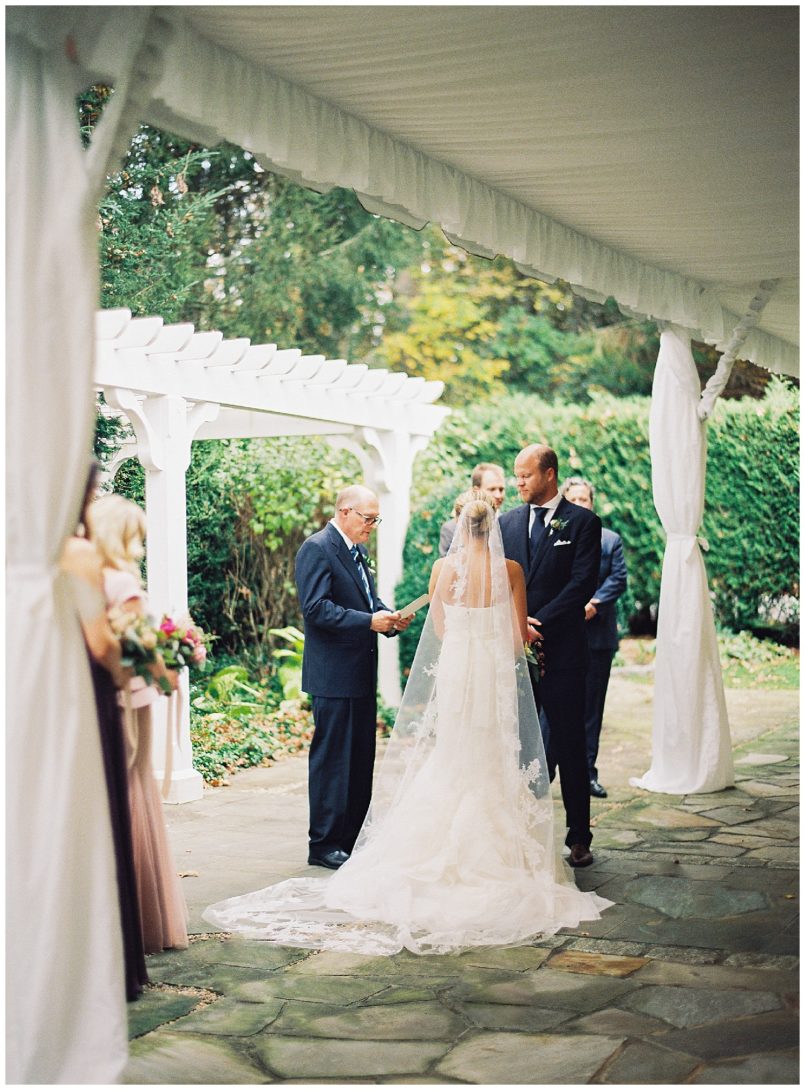 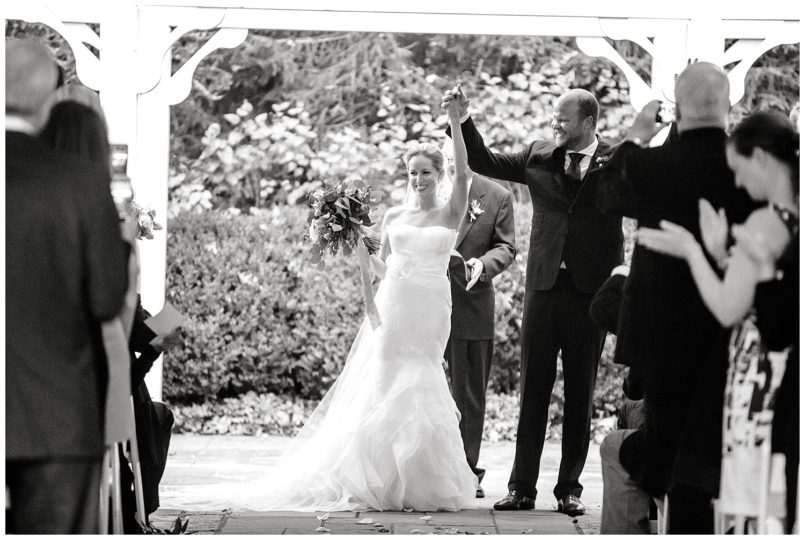 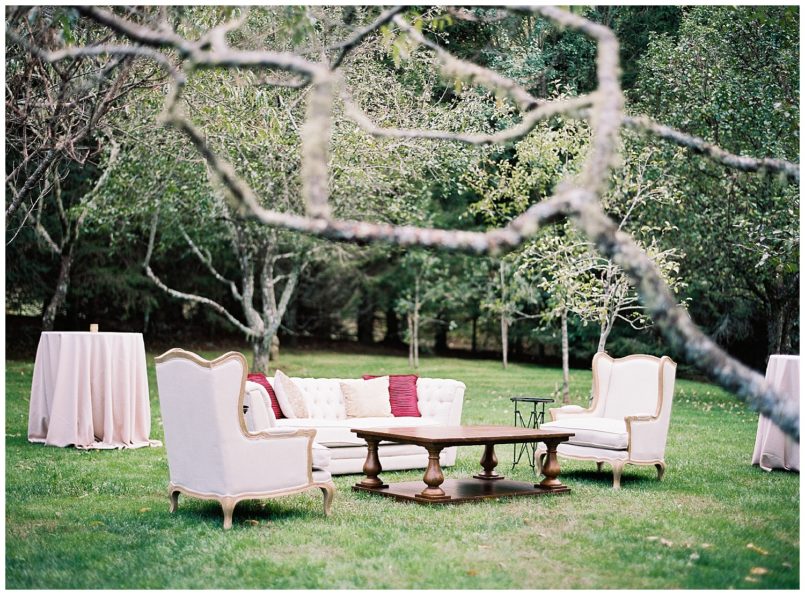 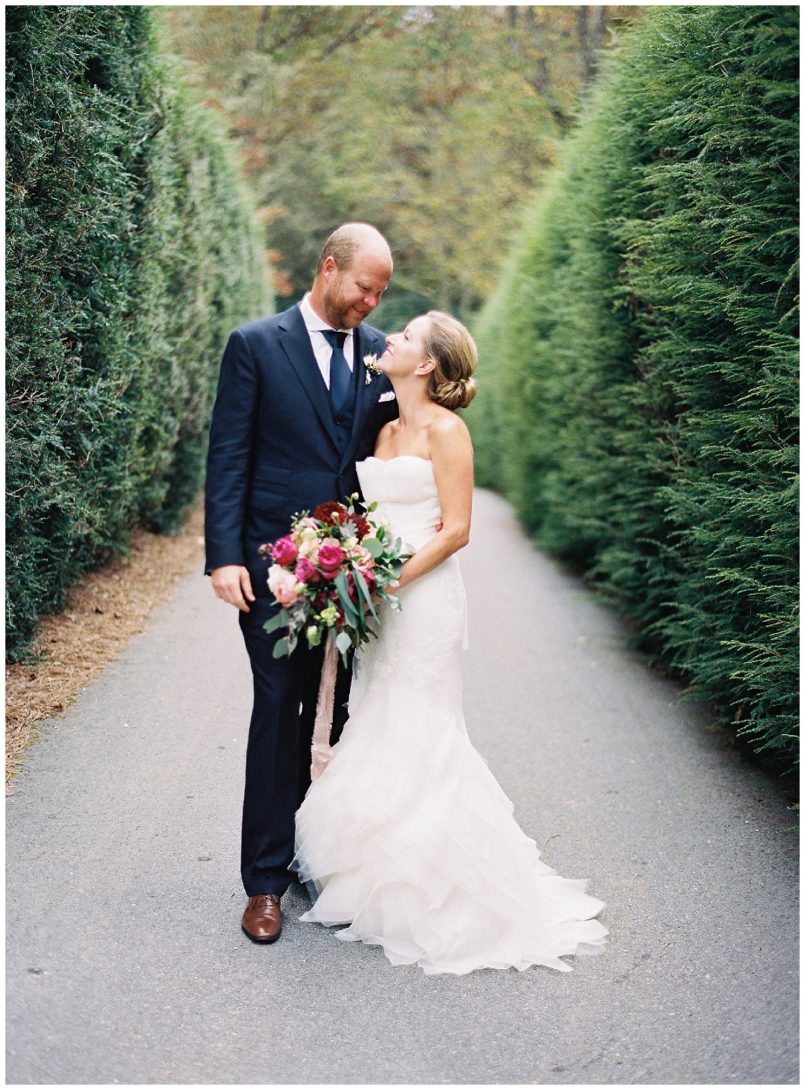 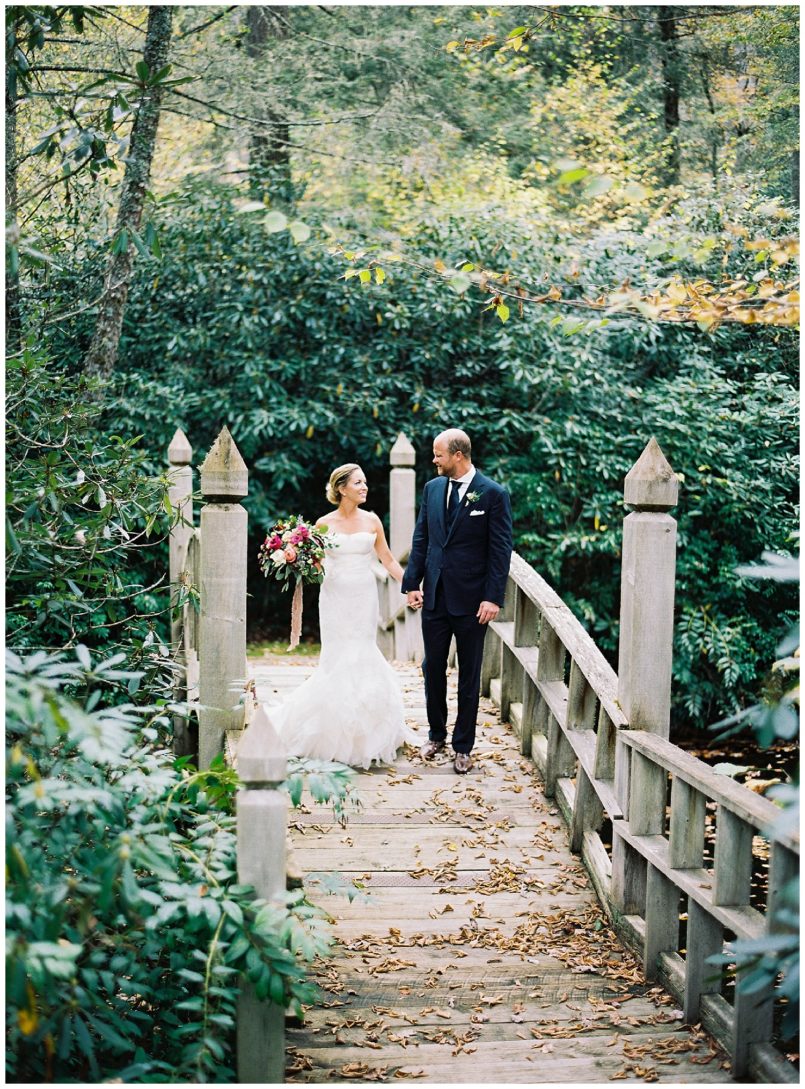 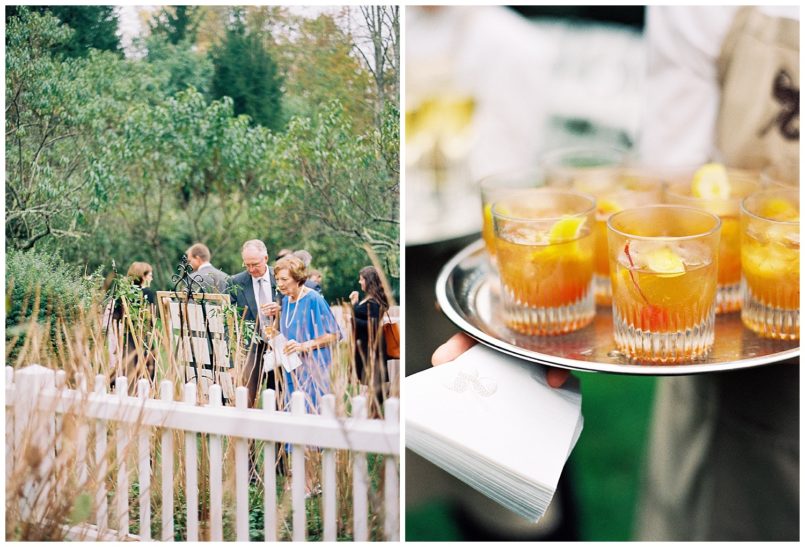 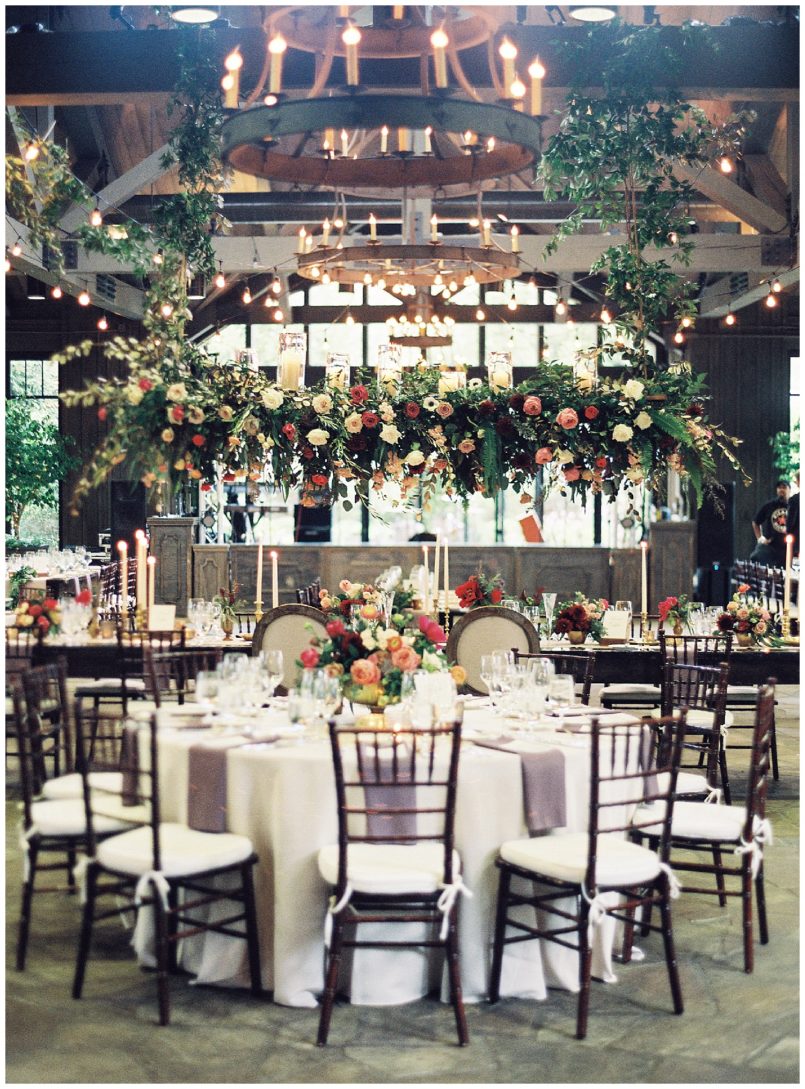 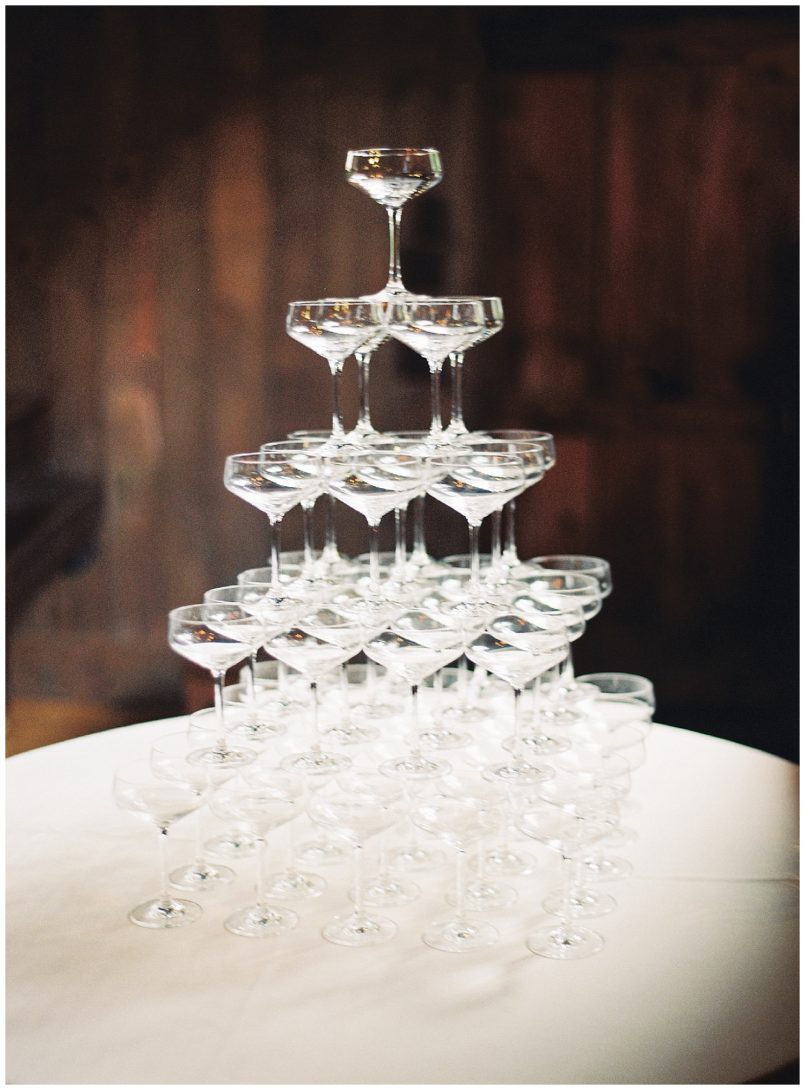 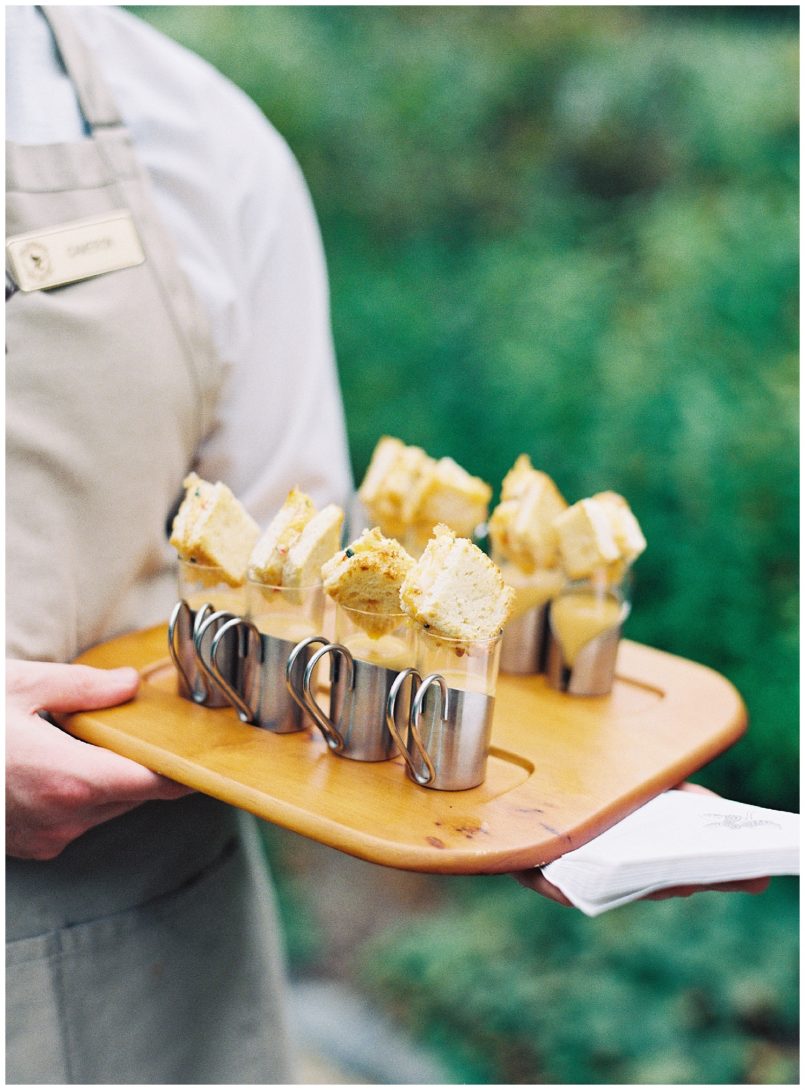 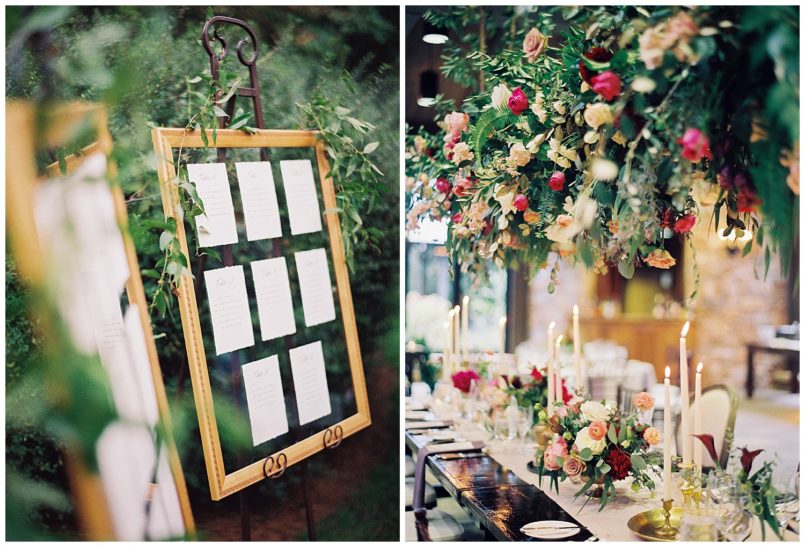 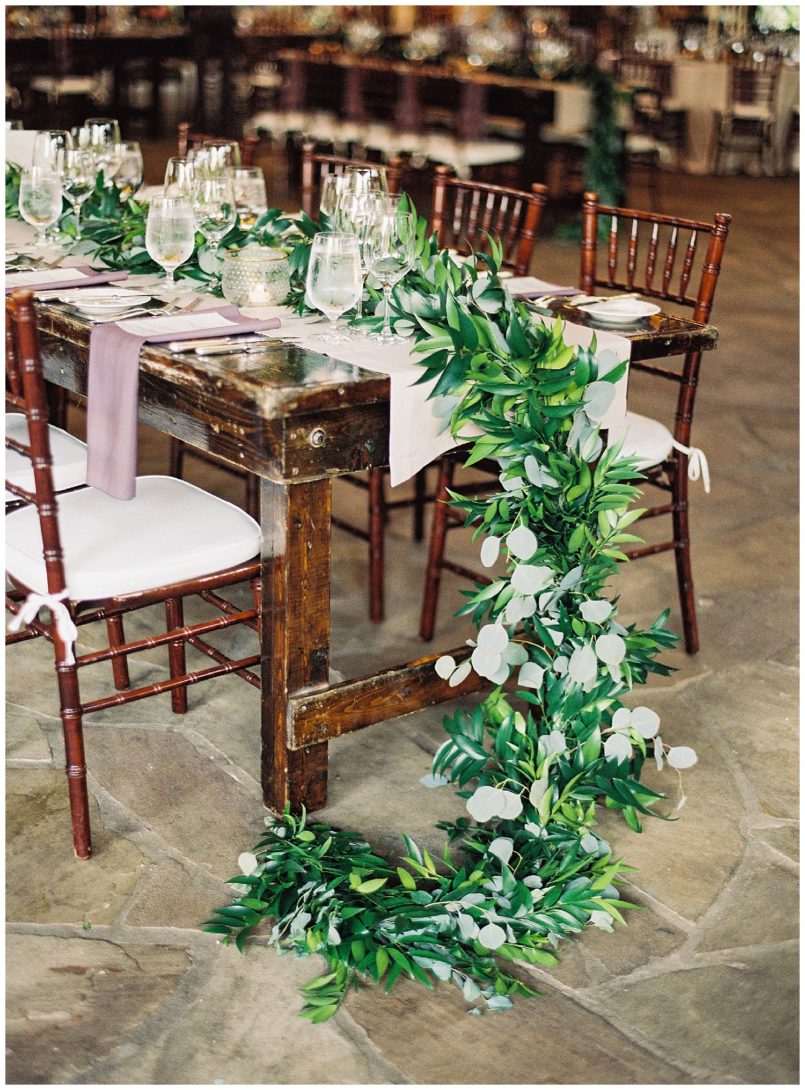 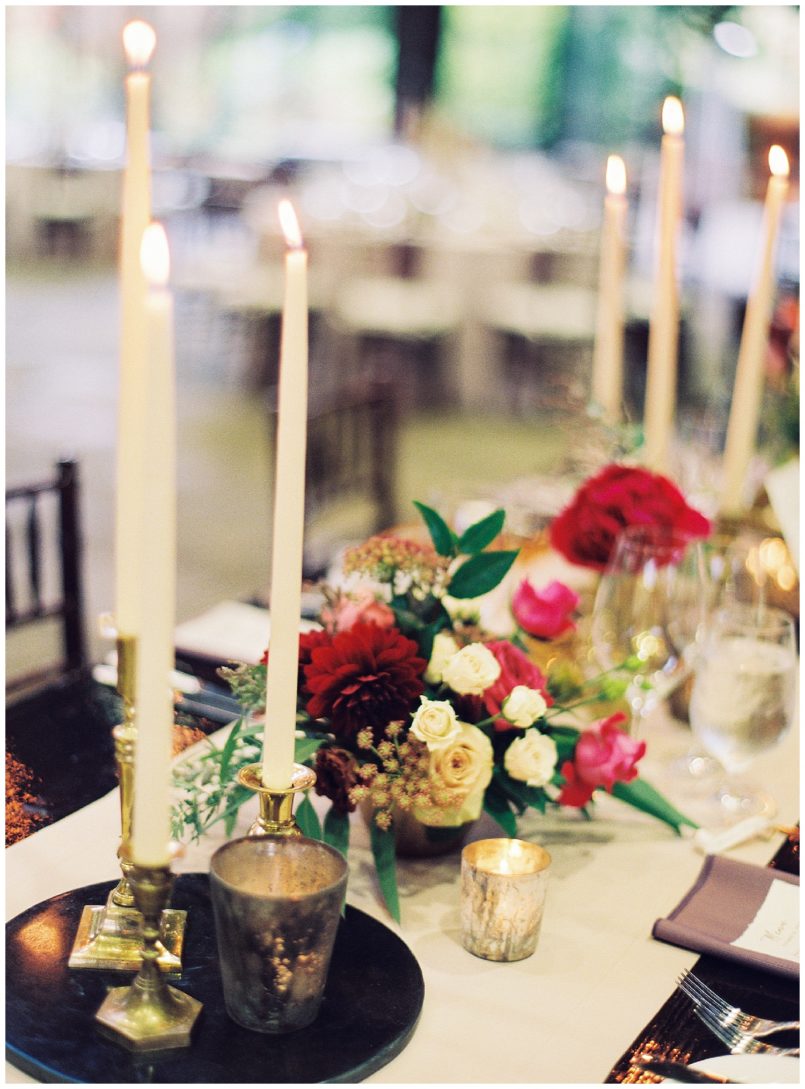 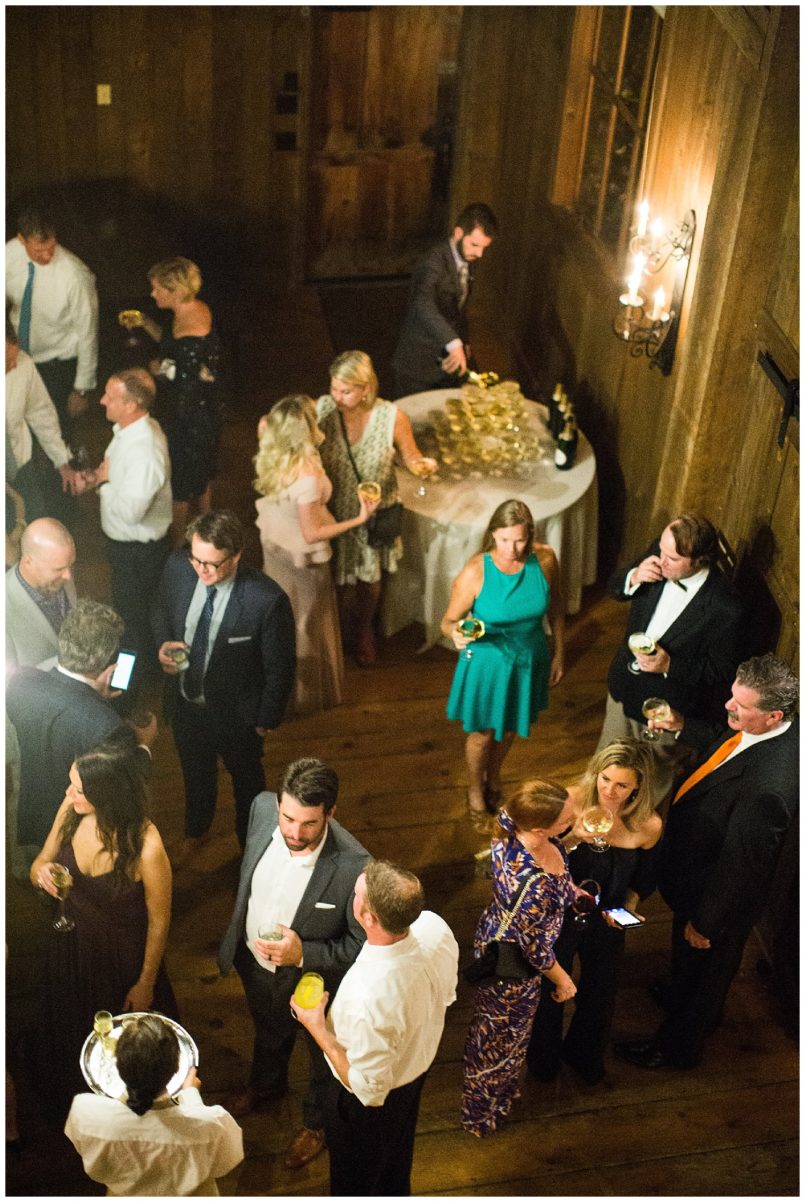 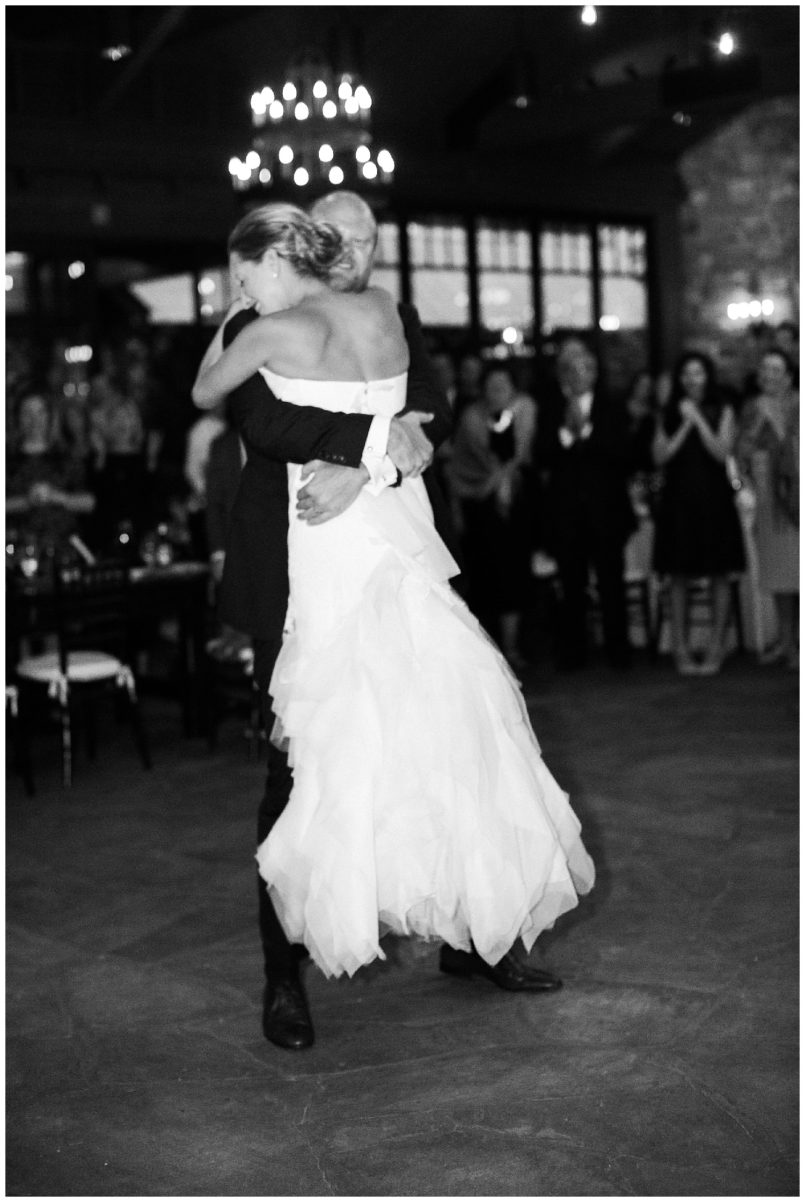